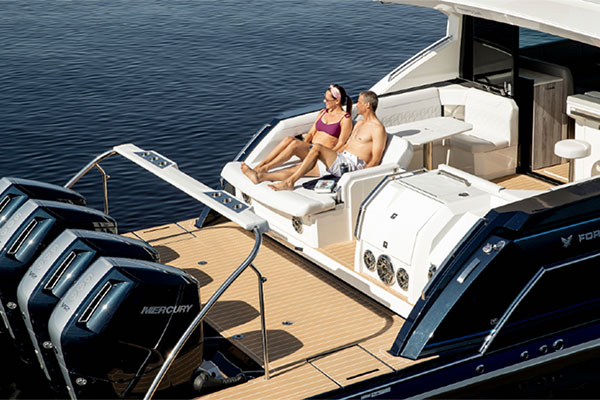 “Last week, Mercury Marine unveiled a groundbreaking new outboard motor, the 600-hp 7.6-liter V12 Verado. Yes, you read that right: this engine has twelve cylinders and puts out 600 horsepower (500 in the heavy-duty SeaPro commercial series). It’s huge (weighing 1,260 lbs. and expensive (around $77,000 each), but Mercury expects boatbuilders will team two, three, or even four of the engines together on the transoms of boats up to 60 feet.

However, there’s a lot more to this groundbreaking engine that may change the game for outboards.

The V12 Verado rides on a rigid mount that does not allow the powerhead to pivot like a conventional outboard. Instead, only the gearcase turns in response to the boat’s helm. This cuts down weight, allows multiple engines to be mounted closer, and the wide pivot arc improves maneuverability.”

Talk about a beast of an engine. Tests in twin, triple, and quad configurations reveal that the engine is also quiet as well. It’s a huge engine for sure but the raw power it offers is simply amazing. Considering that just a decade ago outboard engines were around 250-horsepower, this advancement has come a long way.

At Robbinsdale Marine, we offer exceptional used and rebuild outboard engines. Call us at 763-533-0300 or visit our outboard engine sales page for more information.